After pondering the layers of meaning to be found in June solstice festivals, I’ve been gathering South American solstice traditions that have meaning to our family. I’m not exactly sure how they connect to the spiritual meaning of the solstice. I hope that while I look for meaning, my experience will come across to my children through these activities, somehow. Here they are.

I spent a year in the Peruvian Amazon, la selva peruana — it was San Juan when I arrived and also when I said goodbye. San Juan is the most important festival in the region, celebrated with parades, music, dance, and the famous rico Juane, my first meal in the jungle on a hot June night. Juanes are a dish of rice wrapped in a giant bijao leaf, likely originating from traditional local dishes before European influence, but today it represents the head of St John the Baptist. We’ll try our hand at making Juanes at home, using banana leaves instead of bijao and hoping that it still works without a few key local spices.

In honor of Inti Raymi we are singing the song Oración al Sol whenever we need a quiet moment — before bed, at afternoon rest time. This is a modern song, from the 1960s folk revival movement in Latin America, and it was made famous by Mercedes Sosa. It was written based on Quechua poetry and Andean traditions. We sing the first three verses:

I like that it also mentions the struggle for justice, the long suffering of the Andean communities. The last two lines say, directed to Father Sun, “May your strength reach inside our hearts and your vigor give support to my weakness.”

My friend Liliana sent me another verse, from an Andean indigenous community called Los Pastos who revived a solstice ritual at the site of an ancient petroglyph created by their ancestors, in southern Colombia. The petroglyph depicts the Sol de los Pastos, an eight-pointed sun or star. The celebration included this traditional song, passed down through generations. Again, equality is mentioned among the gratitude-for-nature imagery: “You provide equally, for the rich and the poor you make the corn golden.”

Festa Junina! A lighter note. Our family has no Brazilian roots, but my husband and I met because of Brazilian music and Brazilian friends. Festas Juninas is a harvest celebration in Brazil, syncretized with São João and two other saints days, when folk music from the northeast of Brazil is everywhere. Here are some incredible photos and videos — people dress up like peasants from the countryside and dance in the quadrilha, like square dancing. 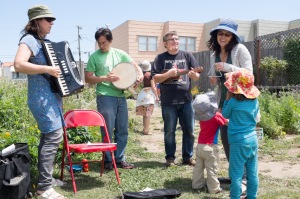 The music, called forró (fo-HAW), is so fun to play and dance to. Forró has three main instruments — the sanfona (a type of accordian), triangle, and a big drum called a zabumba. We’ve been playing and singing it at home, and lucky for us, we have some neighbors who play the accordion! We improvise a zabumba with the drums we have. Here is a short video that shows these instruments and how they fit together in the baião rhythm, one of the three main rhythm patterns in forró music.

June is winter in Brazil, and in the arid northeast countryside it’s the end of the rainy season, and harvest time, a turning point in the agricultural cycle. A time of drought, when water is so important. Sound familiar? Here in California it’s the drought season but we’re also in an historic drought overall. Hmm . . . perhaps, I have finally found some festivities that reflect the summer mood of nature that I’m looking for?!

“Asa Branca,” one of the most famous forró songs by the king of forró, Luiz Gonzaga, is the mournful story of a man leaving his land, his village, his love, because the drought has destroyed his farm. Sad but beautiful. At home we’ve been playing this and another song: “Forró no Escuro” and “Asa Branca.”

I’ve translated “Asa Branca” into Spanish to sing and play at home and with our Spanish music group.

Finally, the most beloved June tradition that unites all of South America . . . fútbol!!

Last week the Copa America kicked off in Chile, the tournament of the 10 South American soccer (fútbol) national teams. Between Copa America and the World Cup, every other year is a major summer of futbol! Nothing in my experience growing up in the US quite compares to the sensation of soccer — the loyalty and pride that unites a people who share the same flag, who feel that sense of being from somewhere, and somewhere special! It’s cultural pride. Something I want my children to feel so strongly: that they love their roots, they don’t feel ashamed of where they come from when it seems too different to be cool. I want them to quote my chicana neighbor Paloma who said, “I feel Mexican in my bones.”

This year’s theme is a cheesy pop song, but the video shows off traditional dance costumes from the participating nations. It doesn’t move me quite as much as Shakira’s inspiring World Cup anthem, but still, I can’t resist my children singing, “América! La copa América!” América is a Latin country, don’t you know!

Lastly, just to tie it all together, note that the new logo and icons from Chile’s Copa America highlight the very same Sol de los Pastos. Coincidence? Or evidence that it’s not just a soccer tournament, but really a solstice ritual!

Happy Fiestas de Junio wherever you are on this earth!

Stay with Us in SF!

Our newly-renovated historic bungalow is a few blocks from Bernal Heights’ restaurants and cafes, and public transit to access all of San Francisco. View our AirBnB listing and come visit!